YOUNG PHARMACOLOGISTS OF KSMU AT THE ALL-RUSSIAN OLYMPIAD 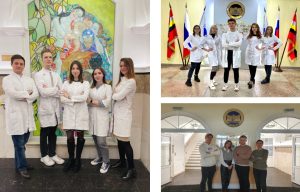 From November 21 to 25, 2022, in Voronezh, the All-Russian Student Olympiad with international participation in pharmacology, dedicated to the 20th anniversary of Pharmaceutical Faculty of Voronezh State Medical University named after N.N. Burdenko was held. Teams of medical, pharmaceutical and dental faculties of KSMU took part in it. At the site of VSMU, teams from Saratov, Tyumen, Gomel, Luhansk, Tambov, Kazan, Turkmenistan, Kyrgyzstan and Tajikistan competed together with young pharmacologists of KSMU.

The team of the Faculty of Dentistry was represented by students of 4th year of study: Simonova D.V., Khvostovoi D.V., Lapshin D.R., Vitushkin N.N., Bokareva A.F.

The Olympiad was held in 4 stages: the first stage – creative team contest “Team Presentation”;  second stage – contest of captains “Introduction of the Team Captain”. For the first and second stages, the teams prepared video clips. The third and fourth stages included team competitions that were held in the form of testing and solving situational problems.

Congratulations to the winners, we wish you continued success in obtaining quality knowledge in the professional field! Thanks to the supervisors for the preparation of students! We would like to express gratitude to the administration of the university for the opportunity to participate in such events, which increase motivation for knowledge!