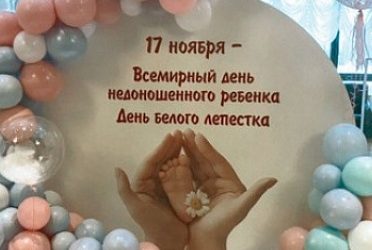 International Day of Premature Babies is celebrated annually on November 17 around the world in order to raise awareness about the frequency of preterm birth and the problems of premature babies and their families. It has been established that every 10th child in the world is born prematurely every year, which is an average of about 15 million children. According to WHO experts, the optimization of modern methods aimed at preventing premature birth in 39 countries with the highest income will reduce the number of children born prematurely by 58,000.

More than a million premature babies die during the newborn period and the first months of life, and the highest rates of morbidity and disability are recorded among the surviving children. Children born prematurely make up the largest group of sick children. Among deeply premature babies born with a weight of 500 g to 1500 g, specific diseases associated with deep immaturity of organs and systems are often recorded, which are extremely rare in late premature babies and babies born on time.

At present, modern technologies have been developed for the resuscitation and nursing of premature babies, the introduction of which allows not only saving lives, but also effectively reducing the rates of morbidity and disability in premature babies.

Every year on November 17, within the framework of the International Day of Premature Babies, various events are held in many countries in order to disseminate propaganda information on issues of care, information support for families with premature babies, and also to draw public attention to the problem of premature birth.

In Kursk, International Day of Premature Babies, the White Petals holiday is held by the Regional Perinatal Center (RPC), where all low-birth-weight premature babies born in our region are successfully nursed, with more than 75% of all premature births occurring in the perinatal center itself. All the conditions for successful nursing of premature babies have been created here, specialized equipment is used, a team of qualified specialists working in high-tech methods of resuscitation, intensive therapy and rehabilitation of small premature babies is working. Since the opening of the perinatal center, more than 780 very premature newborns with a weight of up to 1500 g have been successfully nursed here, of which more than 250 – with a weight of less than 1000 g, 55 babies with a birth weight of 500-750 g. Kursk region, comparable with the indicators of the leading perinatal centers in Moscow and St. Petersburg and abroad.

Now those guys who saw the light in the regional perinatal center of Kursk, study well in schools, are engaged in art and sports, and when they grow up, they will find out how much work the doctors put in for their life and health.

Pediatric Surgery and Pediatrics of the Institute for Continuous Education