WE REMEMBER, WE ARE PROUD, WE HONOR! 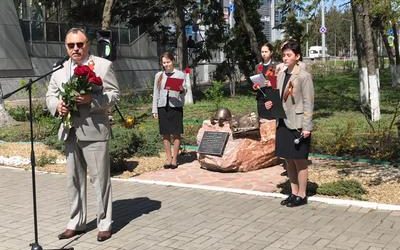 On the eve of the 76th anniversary of the Victory in the Great Patriotic War, the rector of KSMU Professor Viktor Anatolyevich Lazarenko, laid flowers at the memorial sign in honor of the 75th anniversary of the Victory in front of the building of the Medical and Pharmaceutical College of KSMU and honored the memory of the victims with a minute of silence. The memorial ceremony was attended by the faculty of the university, students of the MFC, representatives of the scientific and historical club “CLIO”.
Viktor Anatolyevich addressed the audience with words of gratitude to war veterans, medical workers who saved the lives of soldiers and commanders. Drawing an analogy with the present, the rector noted that even today the medical staff is at the forefront in the fight against the deadly danger of coronavirus infection. Times change, and the value of the profession is always high!
– 72 percent of the wounded and more than 90 percent of the sick were returned to service thanks to the heroic work of medical workers, and this is 6 million people! Recall the decree of the commander-in-chief Stalin that the medical staff is obliged to evacuate the wounded from the battlefield along with weapons and ammunition, and frail nurses under bullets dragged a hundred-kilogram soldier! – said Viktor Anatolyevich.
After the solemn event, the students of the KSMU MFC visited Elena Kuznetsova and Alexandra Khmelevskaya-war veterans, employees of the pharmaceutical school, handed them handmade student cards, laid flowers on the grave of Viktor Mikhailov, a war veteran, director of the pharmaceutical school, and the sponsored burial of Galina Shishmaneva, major of the medical service of the 85th MFH. 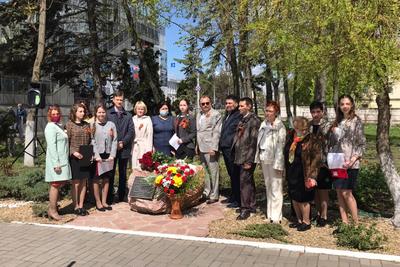