VOLUNTEERS OF KSMU HELD A CAMPAGNE ON PREVENTION OF TUBERCULOSIS 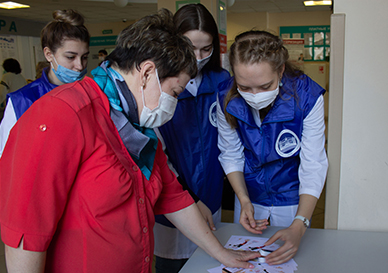 Today, on March 23 in RBHI of Kursk regional hospital No. 1 named after N.S. Korotkov and RBHI “City Polyclinic No.5” volunteers of KSMU held an educational campaign, dedicated to the World Tuberculosis Day.

– We carry out the complex of the actions directed on prevention of tuberculosis and other pulmonary diseases, – Anastasia Gureeva, the coordinator of the sanitary and preventive direction of Russian-wide public movement “Volunteers – physicians”, the student of the 5th course of KSMU explained. – Outreach work is carried out with patients of polyclinics. The level of saturation was measured for everyone. If it is lower than 95, then you should call a doctor immediately. This can signal serious lung disease, including tuberculosis.

“What do you need to know about pulmonary tuberculosis?” – dozens of patients received a memo with this name from the hands of volunteers. Many medical students’ interlocutors were unaware that  tuberculosis  is still one of the top ten leading causes of death in the world! It is a chronic infectious disease caused by microbes of the tuberculosis complex, which can be caused by sick animals and humans. One open tuberculosis patient can infect 10-15 people in a year!

– Pay special attention to the following symptoms: cough for more than two weeks, sometimes with sputum and blood, chest pain, shortness of breath, decreased appetite, weight loss, weakness during the day, night sweats. It is obligatory to follow recommendations of physicians – since 15 years annually to pass fluorography, – Anastasia Gureeva continues to explain.

The management of polyclinics was cooperating with the volunteers of the Kursk State Medical University very well.  Such interaction of medical students is organized with the majority of institutions of practical health care.  According to the head of department of prevention of Regional Healthcare Institution of KGB No. 1 named after N. S. Korotkova S.A. Bulatova, KSMU volunteers actively work with patients, are able to interest people, convince them in the need to take a responsible attitude to their health, provide significant assistance in the prevention of diseases.