VISIT OF THE KSMU DELEGATION TO THE REPUBLIC OF DAGESTAN 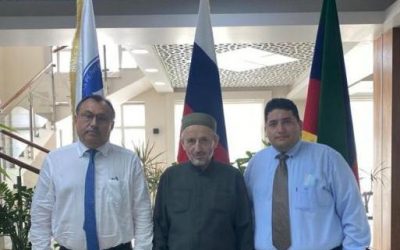 On June 11, 2021, the delegation of the Kursk State Medical University, represented by the rector Professor Viktor Anatolyevich Lazarenko and the director of the International Medical Institute, Associate Professor Mohamad Toufic Chahine, arrived in the Republic of Dagestan, in Makhachkala.

During the visit, the delegation of KSMU visited the centralized Islamic religious organization Muftiate of the Republic of Dagestan.

Viktor Anatolyevich shared his experience in organizing the educational process at Kursk State Medical University in a multicultural and polyconfessional environment. The rector of KSMU stressed that thanks to the well-coordinated joint work of the administration of the Kursk region and the university, a favorable, tolerant environment has been created in the region for studying and living of a large mass of foreign citizens. V.A. Lazarenko thanked the Mufti of the Republic, Chairman of the Council of Alims of Dagestan, sheikh Ahmad Afandi, for carrying out the peacekeeping mission in the North Caucasus and stressed the importance of the participation of representatives of all religious denominations in the fight against coronavirus infection.

During the meeting, the Mufti of the Republic, Chairman of the Council of Alims of Dagestan, sheikh Ahmad Afandi, spoke about the specifics of the Muftiate’s work, about the activities carried out aiming at the spiritual, moral and patriotic education of young people, about assistance in the development of the Dagestan State Medical University.

The meeting was attended by Fatimat Mahmudovna Suleimanova, director of the Medical College named after Bashlarov, founded by the Muftiate of the Republic of Dagestan. Fatimat Makhmudovna proposed possible areas of cooperation with the Medical and Pharmaceutical College of KSMU in the field of joint research and publications, exchange of pedagogical experience.