V.A. LAZARENKO AT THE FIRST MEETING OF THE KURSK REGIONAL DUMA OF THE VII CONVOCATION 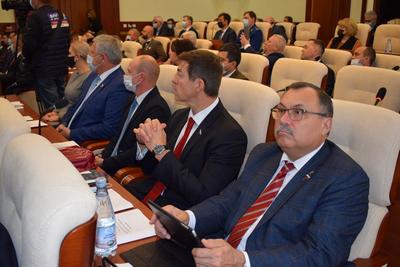 According to the results of the September elections, six parties are represented in the Kursk Regional Duma of the VII convocation. «United Russia» has 31 mandates out of 45, the Communist Party has 7, the Liberal Democratic Party and Just Russia is For the Truth has 2 for each, and the New People and the Party of Pensioners and one self-nominated candidate has 1 for each. Today, the elected deputies gathered together for the first time. The meeting was attended by the Governor of the Kursk region Roman Starovoit.

The main issue on the agenda is the election of the Chairman. According to the majority of votes, it was Yuri Amerev from the «United Russia» party.

Deputies for the next 5 years will have to provide legislative support for all priority projects of the region. We wish them well-coordinated constructive work and balanced decision-making!