THEY PASSED THE WAR AND REMAINED FAITHFUL TO THE PROFESSION 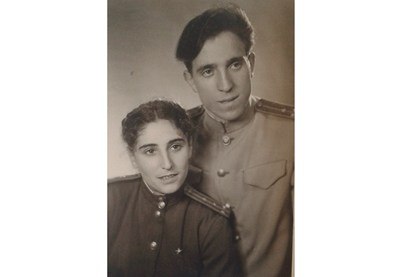 The fact that veterans of the Great Patriotic War and graduates of the Kursk State Medical Institute Anna Kaplinskaya and Nikolai Melchinsky were married, we found out quite by chance when we discovered the story of their daughter, Evgenia Melchinskaya, in social networks.
As Evgenia Nikolaevna notes, her parents were of the same age – since 1918, graduated from the Kursk Medical Institute in 1940, but met in 1944.
When the war began, Anna Iosifovna, a specialist with a red diploma, was already working in one of the hospitals of the Zolotukhinsky district. With the beginning of the war, she went to the front. Together with her medical battalion, she participated in the battles for Kursk, the cities of Ukraine, Poland, Czechoslovakia.
Anna Kaplinskaya also participated in the Kursk Battle . An important event before this battle was the liberation of Kursk. The veteran saw her hometown after the occupation like this: “And here I am in Kursk – the city of my youth… Here it is, my medical institute, silent, quiet, with gaping eye sockets of broken windows and doors. The streets are snow-covered, narrow paths are trodden, no tram calls , the power plant does not make noise, and instead of my 5th school there is a pile of bricks. On the sidewalks – broken glass, collapsed plaster, broken windows in our former shops, hanging staircases”…
Anna Iosifovna had many awards: the medal “For Military Merit”. For courage and heroism, she was twice awarded the Order of the Red Star, medals “For Bravery”, “For the Liberation of Prague”, “For the Capture of Berlin”, “For the Victory over Germany in the Great Patriotic War of 1941-1945”.
After the war, Anna Kaplinskaya devoted her entire life to the profession, being already retired, she continued to work. She is a candidate of medical sciences, an excellent student of healthcare.
According to the daughter’s story, having met in 1944, the parents were always together and went through life hand in hand.
Nikolai Alexandrovich Melchinsky has been working as a surgeon in one of the hospitals in Kursk since August 1941. As the daughter of a front-line soldier notes, at the very beginning of the war, while digging trenches in Selikhov yards, he fell ill with typhus and was treated for a long time. In 1943, his front-line biography began. Nikolai Alexandrovich held the positions of resident of the surgical department of the 380th HPP Hospital (Central Front), junior doctor of a separate mortar regiment of the Reserve of the Commander-in-Chief of the 60th Army. He also participated in the Kursk Battle and left memories of the battle: “At dawn, the sky was black with burning, aviation appeared, fighting broke out in the air. Bombs rained down on the ground, and the hum of the deadly cargo with artillery firing did not stop all day. Burning planes fell to the ground like matches, leaving behind a plume of fire and smoke. Fascist vultures aimed machine-gun fire at the parachuting pilots. With a tremor in our body and pain, we looked at the cruel techniques of the enemy and involuntarily words of revenge escaped, I wanted to help our pilots. Soon the Germans transferred the fire and began to advance in our defense zone.”
Nikolai Alexandrovich’s awards are no less impressive: the medal “For Courage”. For his work, he was twice awarded the medal “For Military Merit”, “For the Liberation of Prague”, “For the Capture of Berlin”, “For the Victory over Germany in the Great Patriotic War of 1941-1945”. Senior lieutenant of the medical service Melchinsky met Victory Day in Germany in the medical battalion, where he operated on the wounded.
After the war, Nikolai Melchinsky returned to Kursk. As well as his wife, he remained faithful to his profession for the rest of his life, worked for many years as the head of the department at Kursk State Medical University. Doctor of Medical Sciences, Honored Doctor of the Russian Federation.
Evgenia Melchinskaya clarified that Nikolai Alexandrovich died in 2003 at the age of 85, and Anna Iosifovna – ten years later – in 2013.
The daughter posted a front-line photo of her parents in social networks.