“THE SPIRAL OF TIME: WHAT DOES THE FALSIFICATION OF HISTORY LEAD TO?” 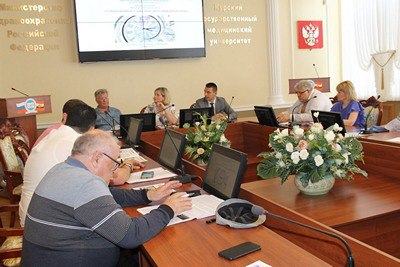 On June 14, 2022, the Department of Philosophy of KSMU and the History Museum of the University held a conference on the topic “The Spiral of time: what does the falsification of history lead to?”. The rector of KSMU, Honored Doctor of the Russian Federation, Honored Scientist of the Russian Federation, Doctor of Medical Sciences, Professor, honorary citizen of Kursk Viktor Anatolyevich Lazarenko addressed the participants with a welcoming speech noting that the conference is another link in a series of events on the problems of falsification of history, prevention of destructive tendencies in the youth environment, technologies of information and psychological impact and others. The problem of the conference is especially relevant for the younger generation, since history is a natural channel for the transmission of social experience that connects people and forms a nation.
Vladimir Vladimirovich Grebenkin, Chairman of the Youth Policy Committee of the Kursk Region, addressed the audience with words of greeting, noting the importance of educational work with young people, the relevance of the topic and a wide range of issues stated in the conference program, wishing everyone a productive discussion.
The problems rased by the participants of the conference were especilly actual in the light of the events in Ukraine. The format of the conference included both reports by specialists and an opportunity for students to ask questions.
The conference was opened by the report of the Associate Professor of the Department of General and Clinical Psychology, Ph.D. in Psychology.N., Associate Professor N.V. Smirnova, who presented the main strategies of manipulative influence on large groups of people using the media and the Internet. Dean of the Faculty of Clinical Psychology, Social Work and Economics and Management, Doctor of Psychology, Professor Vasilenko T.D. and Vice-Rector for Educational Work, Social Development and Public Relations, Candidate of Psychology, Associate Professor Kuznetsova A.A. took an active part in the discussion on this issue. The speech of the head of the Department of Forensic Medicine, Doctor of Medical Sciences, Professor A.A. Tenkov was of particular interest, in which the issue of technology for exposing fake information was faced by the example of the work of forensic experts at the crash site of the Polish president’s plane.
The head of the Department of Philosophy, Doctor of Philology, Doctor of History, Professor S.P. Shchavelev presented his report, which was about the events of the Great Patriotic War and the period of the Fascist occupation of Kursk. The question was raised about the relationship between the personal experience of the war and its social dimension.
A hot discussion was caused by the report of a student of the medical faculty of Zadneprovsky A.S. “The idea of patriotism as a model of civic consciousness in the Russian youth environment”, where various approaches to the definition of the term “patriotism” were presented, and also described the holistic model of patriotic education implemented in our university. The speech of the Associate Professor of the Department of Philosophy, Doctor of History, T.A. Chaltseva about the formation of the ethnophobia of the Russian people in the history of Europe also aroused a great interest.
The results of a sociological survey of students of KSMU about patriotism, attitude to the Great Patriotic War were contained in the report of Professor of the Department of Philosophy E.S. Kravtsova.
At the end, the Vice-rector for Research and Innovative Development, MD, Professor Lipatov V.A. and Assistant Rector for Security Saltanov A.I. addressed the participants with a summary speech. After the plenary session, the discussions were continued on the sectional platforms.
The conference continued with an open discussion, which was attended by students, teachers and guests of the conference.