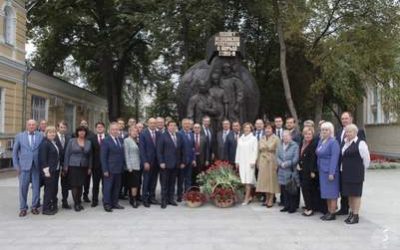 On September 17, a solemn ceremony was held to unveil the monument to the Feat of Medical Workers in the Fight against COVID-19 at Sechenov University.

Employees and students of KSMU, like other medical universities, supported the initiative and made a significant contribution to the creation of the memorial sign.

The author of the monument is Salavat Shcherbakov, People’s Artist of Russia, Academician of the Russian Academy of Arts, sculptor. The creation of the monument was carried out with donations from both legal entities and individuals. The monument is made of bronze and stone, representing a monumental stele with a dedicatory inscription: “The Feat of Medical Workers in the Fight Against COVID-19”. It also contains a sculptural composition depicting medical workers. Behind them is the planet Earth with meridians and a map of Russia.

Welcoming those gathered at the opening, Minister of Health of Russia Mikhail Murashko noted that more than 1.3 million medical workers provided assistance during the pandemic.

The sculptural composition dedicated to the “Feat of Medical Workers in the Fight against COVID-19” was installed on the territory of the Sechenov University Clinical Campus in the park near the Museum of the History of Medicine.