THE BOARD MEETING OF RECTORS OF RUSSIAN MEDICAL AND PHARMACEUTICAL UNIVERSITIES 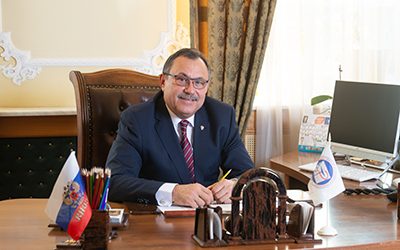 On March 30, Rector of Kursk State Medical University V.A. Lazarenko took part in the board meeting of Rectors of Russian Medical and Pharmaceutical Universities. The meeting, which was held in the videoconference mode, was attended by the Minister of Health of the Russian Federation M.A. Murashko.

The topic of the meeting was the development of science at medical universities, issues of integration with scientific institutes of the Russian Academy of Sciences.

The general board meeting of Rectors of Medical and Pharmaceutical Higher Educational Institutions stated that one of the priority directions in the development of medical science is the interaction of educational establishments of higher education and institutes of the Russian Academy of Sciences. The main directions of cooperation are the training of young scientists in cooperation with the Russian Academy of Sciences and the development of promising scientific areas in accordance with the goals and objectives of the “Program of Fundamental Scientific Research for the Long Term (2021-2030)”.

The ability of medical universities to carry out effective cooperation with scientific institutes of the Russian Academy of Sciences is the key to success in the coordination and implementation of fundamental and exploratory medical research, taking into account prevailing directions, principles and priorities of state policy established by strategic planning documents that determine socio-economic, scientific and technological development of the Russian Federation.

– to consider the work on the development of scientific cooperation of higher medical educational establishments and institutes of the Russian Academy of Sciences a priority type of activity;

– to actively implement the results of research in priority areas of medical science, strengthening the scientific cooperation of higher education with scientific and Research and Educational Centers in the regions and the real sector of economics;

– to submit to the Ministry of Health of the Russian Federation proposals to increase funding for scientific research carried out by medical universities within the framework of the state assignment, taking into account their ranking in the “Federal System for Monitoring the Effectiveness of Scientific Activity of Organizations”;

– constantly and systematically carry out work on the employment of young scientists in medical universities by attracting the most active to targeted postgraduate studies and the allocation of intra-university scientific grants in the most promising areas of medical science;

– to increase the efficiency of the formation of a balanced training system for scientific personnel and increase their competitiveness at the world level, consider the possibility of attracting members of the academic community of the Russian Academy of Sciences to the work of the Board of Trustees and Supervisory Boards of universities.

The leadership of Kursk State Medical University fully supports the points of the decision made and is ready to make efforts to implement the tasks set and take part in projects initiated by the Board.