THE BEGINNING OF THE ACADEMIC YEAR AT KSMU 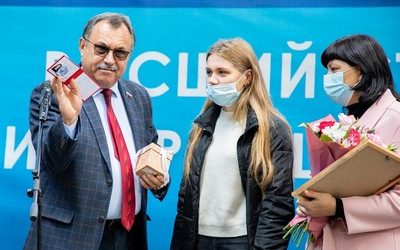 Today, a solemn event, dedicated to the beginning of the new academic year, was conducted at our university. Freshmen of all faculties of KSMU, the International Medical Institute and Medical and Pharmaceutical College were greeted by the rector professor Viktor Anatolyevich Lazarenko and the university administration. In his welcoming speech, Viktor Anatolyevich congratulated the freshmen on their entry into a new stage of adult life and the large student family of KSMU, wished them a successful academic year and hard work in gaining new knowledge and skills. Due to the restrictions on holding mass gathering events, the meeting was conducted in compliance of all the measures of sanitary-epidemiological safety. The event was attended by the leaders of the first years of all faculties.

Freshmen and students of KSMU were greeted and congratulated by the chairman of the Kursk regional organization of the Trade Union of Healthcare Workers of the Russian Federation Svetlana Vladimirovna Okhotnikova.

According to the university tradition, a 1st year student of the medical faculty Evgenia Kravchenko took the oath of the Freshman of KSMU.

Rector V.A. Lazarenko especially noted the freshman – student of the 16th group of the medical faculty Naumova Angelina Sergeevna for her high achievements in mastering the disciplines of secondary general education. Angelina passed the Unified State Exams with 300 points! Victor Anatolyevich presented parents of A. Naumova with a letter of gratitude, and Angelina herself – a personal student card and a memorable gift a bell with the symbols of the Kursk region and KSMU. The ringing of the bell has become a symbolic starting point in teaching freshmen at our Alma mater and comprehending new knowledge!

In the second part of the solemn event, course and group leaders received student cards and electronic passes from the hands of the rector. Vice-rector for Educational Activity and General Affairs, associate professor V.P. Gavrilyuk addressed first year students with welcoming words. The meeting ended traditionally with the KSMU Anthem. 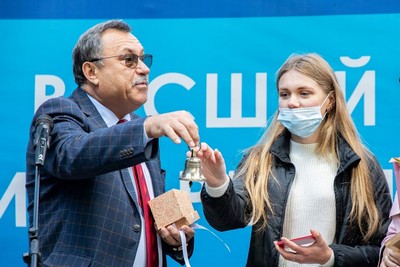 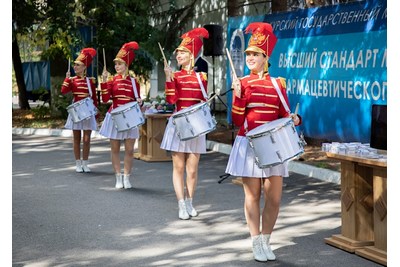