THE ALL-RUSSIAN FORUM OF MEDICAL STUDENTS HAS COMPLETED ITS WORK 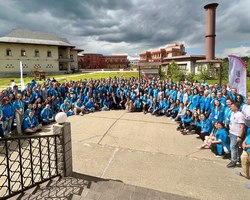 For three days, participants of the VII All-Russian Forum of Students of Medicine and Pharmacy, held together with the I All-Russian Forum of Medical Students and Young Doctors “Pulse of Time”, worked on three main tracks: “Youth Policy”, “Science and Innovation” and “Professionalism”. Within these areas, the three best initiatives were presented during the plenary session on the closing day of the forum.
The peculiarity of the forum was that it was attended not only by students, but also by residents and young scientists. In total, 592 students representing 84 educational and scientific organizations of various departmental subordination became participants of the forum.
The plenary session was attended by Mikhail Murashko, Minister of Health of the Russian Federation, Vladislav Shapsha, Governor of the Kaluga Region, Sofia Malyavina, Director General of the autonomous non-profit organization “National Priorities”, Elena Golukhova, Chief Freelance Cardiologist-Arrhythmologist of the Ministry of Health of the Russian Federation, Director of the Bakulev Cardiovascular Surgery Center of the Ministry of Health of the Russian Federation, and Elena Golukhova, Chief freelance oncologist of the Ministry of Health Russia (Central, Volga, North Caucasus Federal District), Director General of NMRC Radiology Andrey Kaprin.
During the plenary session, the Minister of Health of the Russian Federation Mikhail Murashko made a speech.

— Healthcare in recent years has become not just a priority of state policy, but has become a topic of survival, a topic of saving the population, which in its turn has become the key to our ability to gather in one hall without masks. It was actually done by our colleagues, doctors, nurses, doctors, orderlies, nurses, scientists — those who overcame this difficult period for the whole world, for our country,” the Minister said.
According to the Minister, one of the key topics for the state is the preservation of the health and well-being of the population. Within this vector, the tasks facing healthcare are to ensure sustainable population growth, increase life expectancy to 78 years, and increase the proportion of citizens systematically engaged in physical culture and sports to 70 percent.
— When we talk about what a person wants, it is, of course, to live long and be healthy. Indeed, a long and active life is what the whole world strives for, and this is the normal desire of every person. The healthcare system works to help a person to avoid a serious illness or to face illnesses as late as possible,” Mikhail Murashko noted.
According to the Minister, the key components of quality management in healthcare are licensing requirements, including requirements for facilities, equipment, and a certain part of the processes that must be built in a medical organization. The second is healthcare personnel. The third is the material support of the process itself, the sufficiency of resources.
— Healthcare personnel is the most difficult resource to replace, the most expensive resource in the healthcare system. In order to train a doctor, it takes at least 6 years, but, of course, every doctor studies all his life, this is residency, postgraduate studies and many other educational modules that we go through during our lifetime,” the Minister stressed.
The next important direction in the healthcare system is digitalization.
— That is why digitalization is to see everyone, pay attention to everyone and, accordingly, form a personal track for the treatment of the disease and also to monitor compliance with all protocols, — the Minister noted.
During Mikhail Murashko’s speech, the most important projects in the field of digital healthcare were presented: the federal register of preferential drug provision, the superservice “My Health”, VIMIS development of EGISZ.
— We are not using computers. We don’t just use certain software products. We are moving into the format of digital transformation. These are fundamentally different things, because when we are in the digital transformation mode, we are rebuilding processes,” Mikhail Murashko said.
Winners’ initiatives
After the speech of the Minister of Health, the participants of the plenary session were presented with the initiatives developed during the forum. For three days, the participants worked on projects aimed at improving the system of training medical personnel and the development of the healthcare system. As a result, the best student works were demonstrated on the three announced tracks.
The participants of the track “Youth Policy” (124 people) proposed nine initiatives, including improving the system of mentoring and tutoring in universities, preventing emotional burnout, attracting and securing medical personnel. The work “Platform of practices of youth policy of medical students” won this track.
According to the track “Science and Innovation”, which included 123 young specialists, eight initiatives have been developed, united in three key areas: from scientific initiatives to conscious ideas, a workshop of scientific communications, a content platform for broadcasting scientific knowledge. According to the track “Science and Innovation”, “Navigator of Medical Science” was recognized as the best work.
As part of the third track — “Professionalism” — 104 participants developed nine initiatives, among which were the creation of the All-Russian legal independent medical college, improvement of the mentoring system, patient support using a mobile application. “Student+” became the winning project of the track “Professionalism”.
At the end of the presentations and expert presentations, Mikhail Murashko noted the relevance of all the presented initiatives, and also expressed confidence in the prospect of their further implementation.
Source: https://minzdrav.gov.ru/news/2022/06/06/18830-zavershil-rabotu-vserossiyskiy-forum-studentov-medikov