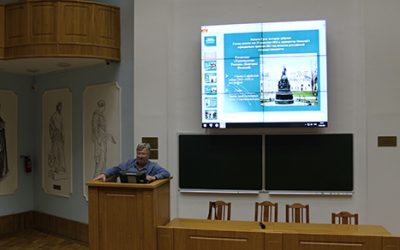 Vice-rector for Educational Work, Social Development and Public Relations A.A. Kuznetsova addressed the participants with a welcoming speech, noting the enormous importance of the civil-patriotic direction in the educational work of the university.

Professor of the Department of Philosophy, Doctor of Historical Sciences E.S. Kravtsova was the moderator.

Sergey Pavlovich told students about the history of Kursk. They learned about the past of their native land, and about how this past was discovered, studied and shown in museums. The audience learned about the fact that the remains of ancient settlements, burial mounds, precious treasures have been studied here for three hundred years in one way or another. The Kursk territory and the adjacent regions of Kievan Rus have become a very typical testing ground for knowing the information about the past centuries.

Scientists and politicians, archivists and practitioners of various professions, noble people and common people – they loved the past of the Motherland and tried to preserve it, understand it, pass it on to young people. Portraits of researchers, their finds, publications of their books, ancient monuments, views of cities and villages of the 17th – 20th centuries, pictures of the local nature – all this was presented to students.

But the most memorable and emotionally intense part was the part in the dialogue format, where students had the opportunity to ask questions to Sergey Pavlovich and got the answers. The students were interested in history, philosophy, but most of all they wanted to hear the professor’s personal attitude to certain aspects of culture, history and everyday life.

In front of the audience, under the leadership of the Head of the Department of Social, Humanitarian and Artistic Literature of the library L.I. Zakharova organized a thematic exhibition “Kursk on the Threshold of the Millennium”, where students could get acquainted with the works on the history of Kursk and the Kursk territory, including two huge volumes by S.P. Shchavelev “Discoverers of Kursk Antiquities”. You can get acquainted with their content at the university electronic library.

Each student received vivid pictures of the history and culture of Kursk and its surroundings in the distant and recent past, a real pleasure from the dialogue! 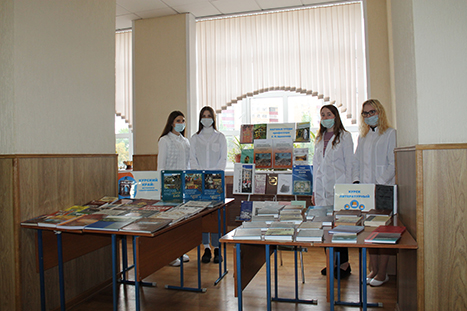