SOLEMN MEETING OF THE ACADEMIC COUNCIL WAS HELD AT KSMU

On February 9, the meeting of the Academic Council, dedicated to the 86th Anniversary of the University Foundation, was held at KSMU. Deputy Governor Andrei Viktorovich Belostotsky and a graduate of KSMU, inventor of the world first vaccine against coronavirus “Sputnik V” Denis Yuryevich Logunov were among the honorary guests. The meeting of the Academic Council was opened by Rector Professor Viktor Anatolyevich Lazarenko. He thanked the employees for their well-coordinated work, achievements and active participation in the fight against the new coronavirus infection.

One of the significant events is the opening of the Anatomical Theater – the first in the system of higher medical education of the Ministry of Health and in the system of medical personnel training in modern Russia in general.

In the past year a lot of the university efforts and resources were aimed at helping practical healthcare in the fight against the new coronavirus infection. More than 1,000 university staff members and students are employed in medical institutions of Kursk and other regions. Over 5,000 people were trained in 7 programs of additional professional education on the most relevant aspects and features of the course of the new coronavirus infection and the provision of medical care to various categories of the population.

“The past year was not easy, but we coped with it, mastered a new distance learning format, maintaining a high level of medical education quality,” stressed Viktor Lazarenko Rector of KSMU. – I compare the past year with 1941, when graduates of the 4th, 5th and 6th years went to the front. In 2020 the situation was largely similar. Volunteer students have willingly supported city residents and continue their activity, delivering medicines, food, and providing psychological assistance by the hotline. This demonstrates their civic position and dedication to the chosen cause.

Denis Logunov, a graduate of KSMU, developer of the “Sputnik V” vaccine, Deputy Director for Research of the Federal State Budgetary Institution “National Research Center for Epidemiology and Microbiology named after Honorary Academician N.F. Gamalei” of the Ministry of Health of the Russian Federation, Doctor of Biological Sciences, Corresponding Member of the Russian Academy of Sciences presented his speech “FIRST VACCINE AGAINST COVID-19”.

– It is a great honor for me and a great joy to return home, to the walls of my native university, understanding that my teachers are interested with my work. 21 years ago I graduated from the university and now I have returned to share with you some of the results of my activity, ”Denis Logunov addressed those present.

Denis Yurievich spoke in detail about the stages of vaccine development, answered questions from members of the Academic Council.

Deputy Governor Andrey Belostotsky congratulated the staff of the university on the 86th Anniversary of Kursk State Medical University Foundation:

– Due to the professionalism of KSMU employees, the university remains one of the best higher educational establishments in the health care system of the country. More than thousand employees and students are employed in practical healthcare institutions. They provide assistance to patients with the new coronavirus infection. Volunteers work in call centers, deliver food and medicine to those in need by personal vehicles. The University makes an invaluable contribution to the fight against COVID-19. We couldn’t have done it without you! At the meetings held by the Minister of Health Mikhail Murashko, Kursk has never sounded in a negative context. This is a large share of the merit of KSMU.

Andrey Vladimirovich thanked the university for its assistance to regional healthcare and presented awards to university teachers.

By the decision of the Academic Council, the titles of Honorary Professors of KSMU were awarded to the Deputy Director for Research of the Federal State Budgetary Institution “National Research Center for Epidemiology and Microbiology named after Honorary Academician N.F. Gamalei”of the Ministry of Health of the Russian Federation, Doctor of Biological Sciences, Corresponding Member of the Russian Academy of Sciences, graduate of the Faculty of Biotechnology (2000) of Kursk State Medical University Denis Yuryevich Logunov and Head of the Department of Anesthesiology, Reanimatology and Intensive Care of Postgraduate Faculty, Honored Worker of Higher Education of the Russian Federation; honorary worker of science and education of Kursk region; to the laureate of the annual award in the field of medical and pharmaceutical education in the nomination “For a Complex of Educational Publications” Doctor of Medical Sciences Professor Sergey Aleksandrovich Sumin.

Members of the organizing committee of the competition “Kurskaya Antonovka” arrived at the Academic Council with a special mission. For 20 years of its existence 315 citizens of Kursk became its laureates, 7 of which were representatives of KSMU. There were several winners in different categories every year. This year, for the first time, only one person got the award – Denis Yuryevich Logunov. He was awarded the “Person of the Year 2020” honorary prize, having received a symbolic apple.

The solemn meeting of the Academic Council was closed by video greetings of colleagues from other universities, including foreign ones, and the award ceremony for the KSMU staff members. In honor of the 86th Anniversary of Alma Mater, the academic teaching staff and students received awards from the administration of the region, city and regional Duma. 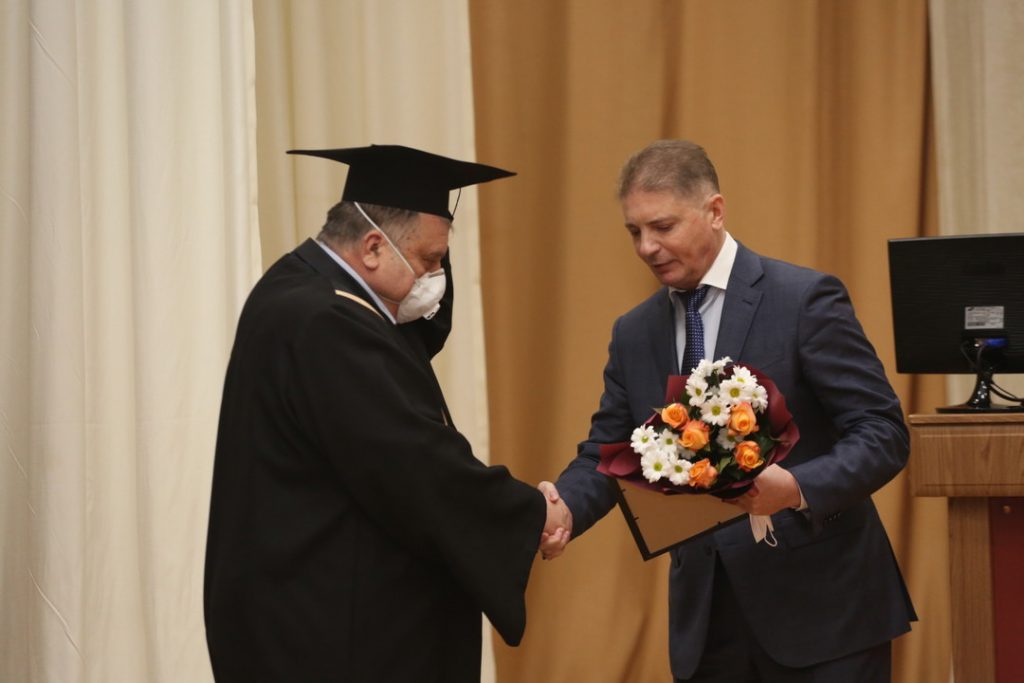