SCREENING OF THE BIOGRAPHIC FILM “LUKA” 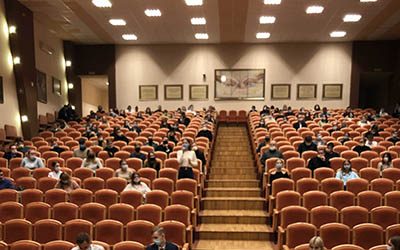 Within the framework of the II International Scientific and Practical Conference “From Fundamental Knowledge to “Fine Use of a Scalpel””, dedicated to the memory of Professor V.F. Voino-Yasenetsky (St. Luke, Archbishop of Simferopol and Crimea), on September 23, 2021, a screening of the biographical film “Luka” (director’s cut), provided by the St. Luke (Voino-Yasenetsky) Charitable Foundation (Kislovodsk), took place. The assembly hall of KSMU accommodated students of various courses and faculties, who are not indifferent to the fate of a scientist, doctor, archbishop, St. Luke, who has become the personification of harmony of body and soul in a single person. The audience included students of the Kursk Orthodox Theological Seminary.

The feature film “Luka” was a successful attempt to bring the image of the saint closer to our contemporaries. The biography of Right Reverend Luke is well known, he lived quite recently, there are many testimonies left, but the more you discover facts about the holy surgeon, the more you feel the shock of his feat of priestly and medical service in the name of love.

During the Soviet persecution of religion, he took the priesthood, thereby signing his own sentence. No one could understand: why a successful doctor with a guaranteed bright future chooses such a thorny path? But Valentin Voino-Yasenetsky healed not only the body, but also the soul. The young generation had to comprehend all this and understand the meaning of life, carried through thorns to the stars. At the end of the film, no one was in a hurry to leave, a discussion of the film plot took place, where all spectators entered into an active dialogue on the main pages of the biography of the saint. The final of the discussion was the thesis about the purpose of life, which all participants defined as a quote from the book of V.F. Voino-Yasenetsky “I fell in love with suffering”: “The main thing in life is always to do good to people. If you cannot do great good for people, try to do at least a small one”.