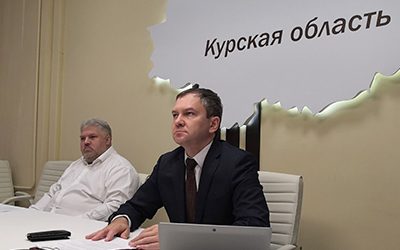 On the initiative of the Committee of Industry, Trade and Entreprising of the Kursk Region, on July 15, 2022, a round table discussion was held in a conference-communication mode with the participation of the trade representative of the Russian Federation in Malaysia. “An Hour with Trade Representative” was devoted to promotion of cooperation between Kursk and Malaysian enterprises, including through the organization of joint production.

The trade representative of the Russian Federation in Malaysia N.V. Ponomarenko presented the specifics of cooperation with Malaysian business and outlined the range of forms of support that are available to Russians when forming business relations with the Malaysian side.

The event was moderated by the Chairman of the Committee of Industry, Trade and Enterprising of the Kursk Region M.N. Aksenov, who noted the prospects for cooperation in the field of production based on modern technologies.

Kursk State Medical University was represented by the Vice-Rector for Scientific Work and Innovative Development, Professor V.A. Lipatov, who noted the openness of the university to international cooperation, particularly in the implementation of research results in the industrial production of medical devices (research and development with further registration, production and application to clinical practice). KSMU conducts research, including applied research, the result of which is the development of new medical technologies, products, tools, devices, test systems. The university is interested in cooperation with the real sector of economy in terms of introducing innovations in production and clinical practice. Thus, on the basis of the departments of surgical profile and laboratories of KSMU, many prototypes of medical devices have been developed: implants, prostheses, surgical instruments, effectiveness and safe use of which have already been proven. The university is interested in technology transfer with the development of industrial designs and establishment of job lot production. Analogues of surgical sutures and textile products made of them (prostheses, wound coatings, etc.) turn out to be from 2 to 5 times cheaper compared to European and American analogues. KSMU researchers are on the threshold of developing technologies based on cell cultivation, tissue growth for the purposes of reconstructive medicine and oncology. On the basis of biologically inert scaffolds, implants can be formed by settling them with the patient’s fibroblasts, followed by their use to compensate for defects in hollow organs, strengthen tissues and restore morphological structures.

Malaysian partners were invited to carry out preclinical tests and independent exploratory developments (R&D) on the basis of the KSMU Research Institute. The research base of the university allows conducting preclinical studies of medicines and medical products. Professor V.A. Lipatov invited representatives of the Malaysian medical business to consider the laboratories of KSMU for the implementation of r&d-projects on a contractual basis.

The export of educational services was also discussed, particularly the joint implementation of educational programs of higher and postgraduate education in the field of medicine, pharmacy and bioengineering, especially taking into account that programs implemented at the university are accredited in many international organizations, which confirms the quality of services provided.

Research and Innovation Center of KSMU