ROUND TABLE DISCUSSION ON EXPERIMENTAL RESEARCH IN ONCOLOGY 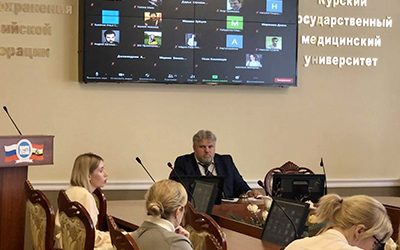 Taking into account the large number of young people interested in the development of oncological science and the launch of the newly equipped interlaboratory cell cluster on the basis of the Research Institute of Experimental Medicine of KSMU, on May 19, 2021, a round table discussion “Prospects for the Development of Cancer Research Using Cell Cultures at the Research Institute of Experimental Medicine” was held.

Among those interested in the development of the topic of oncological experiment were not only employees of the Department of Oncology and Research Institute of Experimental Medicine of KSMU, but also other departments of the University, Research Institute of Genetic and Molecular Epidemiology, clinicians from the Scientific Oncological Center named after G.E. Ostroverkhov, Gomel State Medical University (Republic of Belarus), residents and members of the circle. The problems of studying the fundamental aspects of oncogenesis and solving applied problems were considered: development and testing of new methods of diagnosis, treatment and prevention of oncopathology.