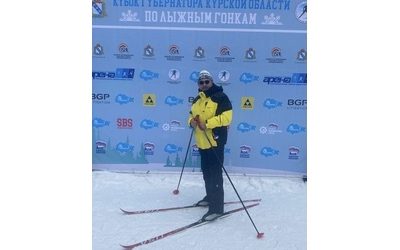 Rector of KSMU Viktor Lazarenko and a team of university sportsmen took part in the sports event – cross-country skiing for the Governor’s Cup.

The competition took place on February 21 on the track in Mokva, located on the territory of the Dubinin children’s camp.

More than two hundred athletes from 14 to 65 years old took part in the ski race. The length of one circle was 2.5 kilometers, the distances were 3, 5 and 10 kilometers. The participants started the 10 km race together with famous champions – Ivan Tcherezov, Dmitry Malyshko, Anton Shipulin and Alexey Petukhov.

The winners and prize-winners of the competition were awarded with cups and original medals.

-Physical culture and sports should become the norm for everyone. And I pass on the baton to the younger generation by my example. I have been skiing since childhood. This is a training for the whole body: hardening and prevention of diseases of the cardiovascular system, strengthening of the vestibular apparatus and immunity, – told Viktor Anatolyevich Lazarenko.