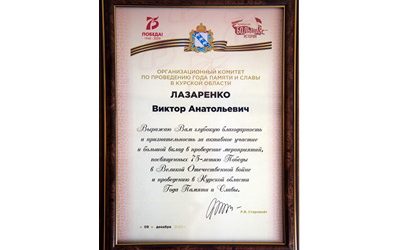 The Organizing Committee on the Year of Memory and Glory in Kursk Region, headed by the Governor of the region Roman Vladimirovich Starovoit, thanked the rector of KSMU Viktor Anatolyevich Lazarenko for his active participation and great contribution to the events dedicated to the 75th Anniversary of Victory in the Great Patriotic War.

2020 in Russia was the Year of Memory and Glory in honor of the 75th Anniversary of the Victory. Themed acts, events, flash mobs were held throughout the country. Kursk State Medical University was also involved in their organization. Despite the pandemic, all the planned events took place, but mostly in the online format. They turned out to be meaningful, lively and sincere.

At the university, special attention has always been paid to the work related to the preservation in memory of the heroic deed of the Soviet people during the Great Patriotic War.

This work will always continue for the younger generation to know and remember its history.