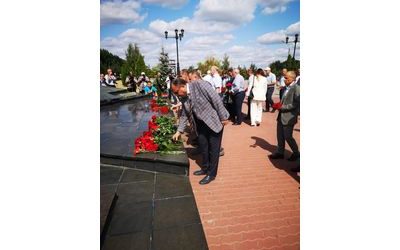 “The memory of the heroic deed will live forever”

August 23, 1943 – Day of the defeat of the Nazi troops by the Soviet troops in the Battle of Kursk. More than 250 thousand Soviet servicemen died in the battles near Kursk, many of whom were our grandfathers and great-grandfathers.

By tradition, on this day, citizens of Kursk honored the memory of the fallen with a minute of silence and laid flowers at the Kursk Bulge memorial complex on prospekt Pobedy. The event was attended by the governor of the region Roman Starovoit, the rector of KSMU V.A. Lazarenko, representatives of the authorities and clergy, residents of the Kursk region.

Eternal glory and memory to them!