MINI-FOOTBALL COMPETITION WAS HELD AT KSMU 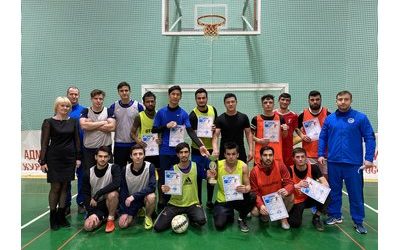 For two days, from 16th to 17th of February 2021, football battles took place in the sports hall of KSMU. Sports teams from the university and the medical college fought for the victory in the mini-football competition dedicated to the 86th Anniversary of Kursk State Medical University and the opening of the International Medical Institute. Foreign students also took an active part in the contest, having fielded three football teams.

The games were held in a tough and fair struggle. Five teams fought for the victory in total. Competitions were held in a round robin system, played for 2 halves of 20 minutes each.

The judges E.A. Bobrovsky and D.A. Telnykh, teachers of the Department of Physical Education ensured its conduct at a high level.

Of course, there were winners and losers as in any competition, but the main thing was the sports atmosphere, emotions, the intensity of passions, which were again felt and experienced by athletes and fans, and which were so lacking during the restrictive measures on mass events.

Acting Vice-rector for Educational Work, Social Development and Public Relations Alesya Kuznetsova congratulated the athletes on the opening of the football season at KSMU, and also presented awards to the winners and prize-winners of the competition.