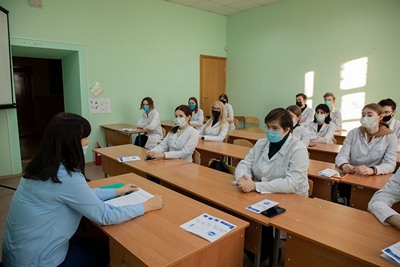 On November 24, 2021, KSMU students met with the prosecutor of the Department for Supervision of the implementation of Anti-corruption Legislation of the Prosecutor’s Office of the Kursk Region – Justice Adviser Elena Rudskaya on anti-corruption issues.

The representative of the Prosecutor’s Office drew the students’ attention to the tightening of legal liability for corruption offenses, both in relation to bribe-takers and bribe-takers, and to the fact that the person who gave the bribe can be released from responsibility if he immediately reports this fact to a higher official or to law enforcement agencies.

Elena Vladimirovna noted that, in relation to the previous year, the number of corruption crimes in Kursk and the Kursk region has significantly decreased, but often people who have fallen into a corruption-dangerous situation conceal this fact, agreeing with the demand of the bribe recipient, and as a result may fall under suspicion as an accomplice to the crime. Elena Vladimirovna also gave examples of specific corruption crimes and gave them a legal assessment. Students had the opportunity to ask their questions on the designated topic.

At the end of the meeting, Elena Vladimirovna gave professional advice and expressed wishes to those present about preventing them from committing corruption offenses of domestic and other orientation.