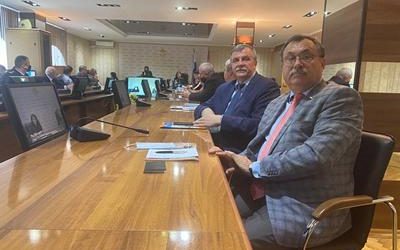 Today, on June 1, 2021 a meeting of the public council under the Russian Ministry of Internal Affairs in the Kursk region was held, in which the rector of KSMU, professor V.A. Lazarenko took part.

The members of the public council paid the main attention to the issues of ensuring safe summer vacations for children and combating the spread of drugs among young people.

The members of the public council were particularly concerned about the increase in crimes related to the use of information and telecommunication technologies. Statistics of recent years records a sharp increase in such crimes. Today, every fourth crime is committed using a gadget and the Internet. And first of all, teenagers and young people are involved in them.

Rector of KSMU V.A. Lazarenko believes that one can defend oneself only by ignoring dubious information and proposals circulating on the Internet. He asks students of KSMU to ignore unsafe information and suggestions, not to succumb to provocations.