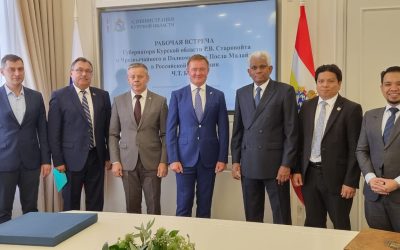 Dato’ Bala Chandran Tharman put forward a number of proposals to expand bilateral cooperation, which he announced to the Governor, inviting him to visit Malaysia at his convenience. The proposals concerned trade, tourism and cultural exchange.

The Governor of the Kursk region supported the desire to strengthen friendship and mutually beneficial contacts. As a result of the meeting, the parties agreed to develop trade and economic cooperation.

Viktor Anatolyevich noted that Kursk State Medical University has been fruitfully cooperating with Malaysia since 1997. Since 2000, KSMU has been recognized in Malaysia, which is a huge achievement in the field of export of educational services. Among the 50 medical universities in Russia, only 5 have recognition of medical education received in Russia.

In turn, the Ambassador thanked the Rector of KSMU for the excellent organization of the educational process and creation of good conditions for foreign students.