KSMU VOLUNTEERS WERE AWARDED DIPLOMAS OF THE PRESIDENT OF THE RUSSIAN FEDERATION, LETTERS OF ACKNOWLEDGMENT OF REGIONAL DEPARTMENTS, UNIVERSITY 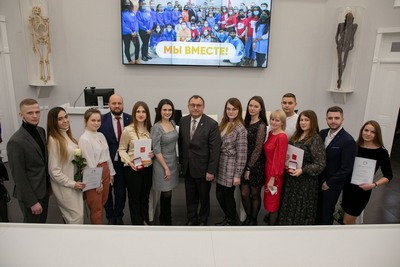 Even during the first wave of the coronavirus pandemic, these people voluntarily responded to the call for help. In difficult times not only for the region, but for the whole country, they were close to those who needed support. The elderly and low-income people, the disabled ones needed help the most. Almost two thousand army of volunteer students of KSMU delivered everything they needed to those in need – food sets, medicines, household chemicals. In the last four months, they have received over 40,000 calls at call-centers, delivered over 16,000 sets of medicines, made more than 5,000 visits, helping doctors get to the patient …

Yesterday, on the eve of the New Year, in a solemn atmosphere, the results of the volunteers’ work in the outgoing year were summed up at the Kursk State Medical University, they presented the Honorary Diplomas of the President of the Russian Federation, awards of regional departments, the university.

– We are together – simple words that united the KSMU family into a single whole. A huge territory from Murmansk to Sochi united under the slogan “We are together” – the geography of KSMU students is so vast – Viktor Anatolyevich noted. – The names of the Kursk medical volunteers are well known outside the region. Olga Zolotukhina became a finalist of the “Volunteer of the Year” competition. The Luka Krymsky medal was personally presented to her by President Vladimir Vladimirovich Putin. Vadim Lashin won a prize in the federal competition in the “HEALTH OF THE NATION” nomination in the track “Volunteers and non-commercial organization” of the #WEARETOGETHER (#МЫВМЕСТЕ) Prize. However, many other, lesser-known volunteers deserve the highest honors. Now in KSMU there are 30 professionally oriented detachments with a total number of more than 1700 people.

The rector presented diplomas of the President of the Russian Federation and commemorative medals “For selfless contribution to the organization of the Russian-wide action of mutual assistance #WEARETOGETHER”:

to Manuilova Natalya Sergeevna 4th year student of the 1th group of the General Medicine Department of the MPC KSMU;

to Ivanykina Valentina Mikhailovna 6th year student of the 6th group of the medical faculty;

The results were summed up and the winners of the nominations of the competition “Volunteer of the Year of KSMU” were awarded.

Head of the KSMU V`olunteer Unit Headquarters Alexey Zadneprovsky, Department Coordinator Medical volunteers of the Action Headquarters Together Olga Zolotukhina warmly thanked the leadership of KSMU, the Governor and the administration of the Kursk Region, the Kursk Region Health Committee, the regional branch of the United Russia party for support and assistance in organizing volunteer actions and projects.

– Everything will be fine when we are together! – the volunteers are sure.

Rector V.A. Lazarenko cordially thanked the volunteers for their good deeds and wished everyone a Happy New Year.

– We wish you even more kindness and love! Let the 2022 bring you a lot of new achievements and great victories! Let the same kind and generous people as you are meet you on your way. If everyone does one good deed a day, the world will become brighter and people will be happier!