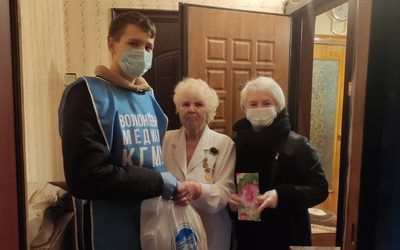 Throughout Russia, on January 27, was held the annual event of memory “Blockade Bread”, which is timed to the 77th anniversary of the lifting of the siege of Leningrad. KSMU volunteer students joined the event. Together with the administration of the autonomous social institution of the Kursk region “Veteran”, they congratulated the veterans on the memorable date, delivered them food packages and personal protection equipment.

It’s still not clear how many people died in the enemy siege. According to historians, about 1.5 million people. A 125-gram piece of bread became the symbol of the steadfastness and courage of the residents who held the defense of the city for about 900 terrible days. This was the daily norm for the elderly, women, and children. The workers used to receive 250 grams. The composition of the bread, in addition to oatmeal and rye flour, included inedible impurities-cellulose, wallpaper dust, pine needles, presscake.

It is the duty of modern generations to honor the memory of those who died in the siege of Leningrad from September 1941 to January 1944. These people died of hunger and disease, but they defended the city and did not allow the enemy to wipe it off the earth.