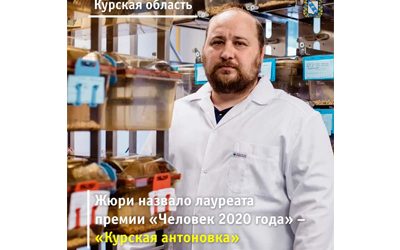 Denis Logunov, a graduate of the Kursk State Medical University, Doctor of Biological Sciences, corresponding member of the Russian Academy of Sciences, creator of the first Russian and world-first vaccine against the Covid-19, “Sputnik V”, became the only winner of the public recognition contest “Person of the Year – Kurskaya Antonovka” at the end of 2020.

The organizing Committee of the contest noted that the year 2020 was difficult in all areas, but there were also positive, outstanding events. These include the creation of a domestic vaccine against COVID-19. Therefore, the jury decided to award the title of “Person of the Year-2020” to the sole winner – Denis Logunov. For the first time in the 20-year history of the contest, the winner is one person. Previously, several people in various categories became laureates. For example, there were 16 winners in 2019.

Denis Logunov graduated from the Biotechnological Faculty of KSMU, Department of Biomedical Engineering in 2000. In interviews with federal and regional media, he said that the faculty played an important role in his life. The talented student was immediately noticed by the teachers and then completed an internship at the National Research Center of Epidemiology and Microbiology named after N. F. Gamaleya.  Now Denis Logunov is the deputy director for scientific work of this center, the head of the laboratory of cellular microbiology, the head of the development group of the Russian vaccine against coronavirus, called Gam-COVID-Vak, and later renamed into “Sputnik V”.