JUNE 22 – DAY OF MEMORY AND SORROW 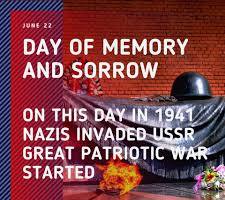 80 years to the day, on June 22, 1941, Nazi Germany treacherously attacked the Soviet Union. The Second World War began. It claimed millions of lives, touched every family without exception.

Not only soldiers, but also doctors were the first to take the blow. At the beginning of the war, the work of the medical service was severely disrupted. The enemy destroyed warehouses with medicines and instruments. There was an acute shortage of military doctors, since the specialization of civilian doctors of peacetime could not provide military specialties. People had to work in super-extreme conditions! The Soviet nation strove to protect their native lands. For medical workers, this also intersected with a sense of professional duty.

Our university, in spite of everything, continued to cope with its task – training of highly qualified medical personnel: in the evacuation and after the liberation of Kursk – in their small homeland. The junior students worked as nurses, the elders were on the front lines. They rescued with all their might, cured, returned soldiers to the ranks of the Red Army. All these difficult war years, they selflessly worked day and night in inhuman conditions without necessary medicines. According to official data, 47 people from the medical and sanitary services received the title of Hero of the Soviet Union, 116,000 doctors received various awards.

The country military medicine saved thousands of wounded and sick soldiers. Almost 77% of them were returned to service through the efforts of doctors, this is 17,157,243 people in absolute numbers – invaluable help for the front!

As a result, the unity of the Soviet people became the source of the Great Victory. The holy mission of our and future generations is to preserve the memory of this striking feat. On the Day of Memory and Sorrow, we bow our heads to our veterans, war participants, doctors and home front workers.

On this day, I would like to wish everyone productive labour and a clear sky overhead. Kindness, harmony and prosperity!

Rector of KSMU, Honored Doctor of the Russian Federation, Doctor of Medical Sciences, Professor, Deputy of the Kursk Regional Duma of the VI convocation, Honorary Citizen of Kursk