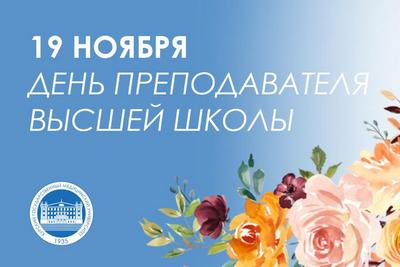 This year, the Day of a high school teacher is celebrated for the first time. The date was chosen not by chance, since November 19 is the birthday of Mikhail Vasilyevich Lomonosov, who is rightfully considered the luminary of Russian science.

In addition, 2021 was declared the Year of Science and Technology by the President of the Russian Federation. In this regard, the role of a high school teacher has gained the highest importance. The teacher is the intellectual pillar of Russia, it depends on them what the next generations will be like. At all times, the task of the teacher was to inspire young people, to kindle their curiosity, to help achieve ambitious goals. And today, the teacher is in the center of scientific knowledge, sharing with students best practices in the field of research and development.

Today there are 708 scientific and pedagogical workers at our university, among them 124 doctors, 370 candidates of sciences. Largely due to their high skill, pedagogical talent, KSMU has the highest ratings among universities. The value of medical teachers is that in their activities they simultaneously combine several directions at once: they are teachers, practicing doctors and scientific researchers, developers of many discoveries.