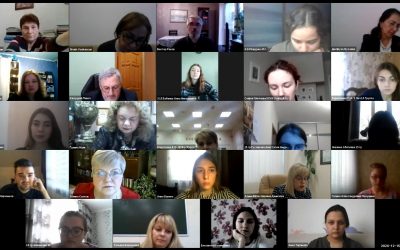 62 participants presented their reports at the conference, 91 publications will be included in the collection of the material, prepared in accordance with the results of the event.

At the solemn opening of the conference the following participants addressed the audience with the welcome speech:

Kalutsky Pavel Vyacheslavovich – Vice-rector for Educational Activity and General Affairs of FSBEE HE KSMU of the Ministry of Health of Russia; Head of the Department of Microbiology, Virology,Immunology; Doctor of Medical Science, professor.

The video-greeting made by the student of 2nd year (4 semester) of the International Medical Institute of KSMU Thomas Tony.

The performance prepared by actors of KSMU student theater “Door to Summer” under the supervision of Alina Sergeevna Voronyuk. Students of General Medicine and Pediatrics Departments Arseniy Hajduk, Daria Monastyreva and Margarita Gerasimenkova addressed the audience through the production in verse.

The conference was held via 4 online platforms at once and included three sessions:

The speakers highlighted current questions of using different types of tea in medical practice: its compatibility with medical products, influence of tea on human body activity, application of tea as an adjunct in therapeutic practice.

Tea in historical and cultural aspects.

Undoubtedly, tea has a tremendous impact on culture of many nations, having become one of the main national drinks for a huge amount of states. Growing, cultivating and trading tea are not only economical, but also historical and cultural phenomenon as the participants of the second session of the conference mentioned in their reports.

The participants compared similarities and differences of tea traditions among the representatives of different cultures and integration of peculiarities of national tea ceremonies in everyday life all over the world.

The Conference Organizing Committee would like to express gratitude to all the speakers and participants of the event for lively interest in I Scientific-theoretical International Online Conference “Tea in Historical, Cultural and Medical Aspects”.

The event had a wide response not only among academic staff of higher educational establishments, but also in media sources. On December 15, 2020 the video plot had already been posted on the website of the news outlet «KURSKCITY», use the following link for more information: http://kurskcity.ru/news/citynews/163097