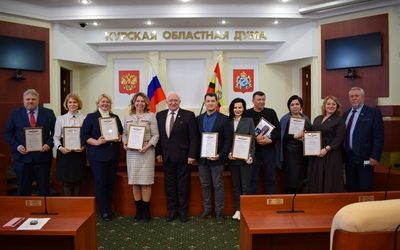 On Friday, February 5, 2021, the Chairman of Kursk Regional Duma, Nikolay Ivanovich Zherebilov, congratulated the representatives of regional scientific community on the Russian Science Day, which is celebrated on February 8. At the meeting, he noted the importance of supporting science in Russia, assessed the contribution of Kursk scientists to the development of the region economy.

The Chairman of the Standing Committee on Education, Science, Family and Youth Policy R.S. Cheked took part in the meeting and delivered welcoming remarks. The Chairman of Kursk regional branch of the All-Russian public organization “Russian Union of Young Scientists” Professor V.А. Lipatov gave a word of salutation. He noted the importance of scientific research results not only for the progressive development of the economy, but also for national security, the need to attract talented youth to science, the formation of interdisciplinary research areas and teams, cooperation between the academic community and society, government authorities. This year was announced by the President of the Russian Federation V.V. Putin to be the “Year of Science and Technology”, so he expressed the hope that even in regional universities there will be opportunities for conducting research at a new level with obtaining global results.

At the end of the meeting, N.I. Zherebilov presented certificates of honor of Kursk Regional Duma to representatives of the scientific community of Kursk region “For a Significant Contribution to the Development of Education in Kursk region, Many Years of Conscientious Work, Significant Achievements in Professional Activity”. In particular, the awards were presented to employees of Kursk State Medical University: Professor of the Department of Operative Surgery and Topographic Anatomy, Head of the Laboratory of Experimental Surgery and Oncology Vyacheslav Aleksandrovich Lipatov and Associate Professor of the Department of Biological Chemistry Yulia Eduardovna Azarova. The achievements of the university staff noted by the regional authorities could not be possible without the progressive development of the material, technical, methodological, organizational base, ensuring the implementation of competitive scientific research and the significance of their results. This became achievable thanks to the far-sighted decisions of the university administration and a clear vision of the prospects for the development of scientific areas.