DEVELOPMENT OF INTERNATIONAL COOPERATION WITH THE REPUBLIC OF BELARUS 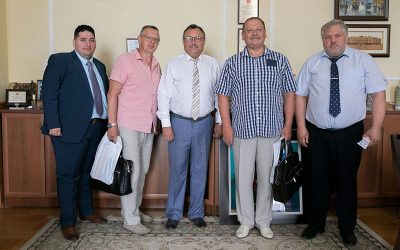 In accordance with the preliminary agreements reached during the visit of the delegation of the Kursk region under the leadership of the Governor R.V. Starovoit to the Republic of Belarus, on July 8, 2022, Kursk State Medical University received the heads of enterprises for the production of medical products and medicines.

Bobrik Oleg Stanislavovich, Head of the Experimental Production Department of the Republican Scientific and Practical Center for Transfusiology and Medical Biotechnology, and Levchik Igor Anatolyevich, Director of OOO MedBelRos, visited the University.

The delegation met with the Rector of KSMU Professor Viktor Anatolyevich Lazarenko. During the meeting, the opportunities for cooperation and a list of projects for priority implementation on partnership terms were outlined. The guests visited the Anatomical Theatre and the laboratories of the Institute of Experimental Medicine.

In the course of communication, preliminary agreements were reached on the joint implementation of the technologies developed in KSMU in the production of medical devices in the form of polymer sponges: hemostatic agents and wound coatings.

Scientific and Innovation Center of KSMU