DAY OF RUSSIAN STUDENTS AT KSMU 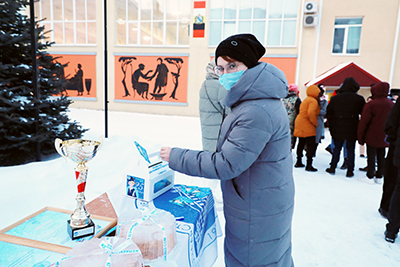 Having traveled all the seas and continents,

The ethnographer put in the book

That there is such a nation – students,

With these words, the event at KSMU, timed to coincide with the Day of Russian Students, began.

Despite the frosty weather, ten teams from all faculties, consisting of the most active first-year medical students, took part in the route game. All stations of the route are organized in accordance with sanitary and epidemiological rules.

The rector of KSMU V.A. Lazarenko congratulated the students on the holiday of the Russian students. He noted that the student years are the most interesting and responsible period in life. He thanked those who helped and continue to help the healthcare system in the fight against a dangerous virus, providing assistance in the outpatient department, and some even in the red zones. He also focused on the ability to have fun, make plans, develop in a personal and professional direction. Viktor Anatolyevich personally congratulated all Tatyanas and presented them with gifts. He wished all students successful studies, enthusiasm in passing the stations of the route and well-being.

After the draw and presentation, the teams were given “score books” and everyone started the competition. As tasks for the winter session, they were to have symbolic exams and tests. They had to go through a lot of quest stations. Among them are sporty, creative tasks and, of course, tasks on knowledge of the subjects studied. The stations were located in different buildings of the university, boys and girls had to compete not only in knowledge, but also in speed. Each team was accompanied by a tutor. The teams sang, danced, guessed riddles, threw darts, scored goals to the teacher, rode on ice skates, demonstrated knowledge of the Latin language and anatomy, took group photos next to the backdrop of a huge dummy student ID card… And at the Simulator’s Halt station, freshmen were treated to a treat from the rector – hot tea with student cakes.

At the end of the route, the students wrote their dreams in “Tatyanki” and lowered them into a storage container at the Museum of KSMU.

And in order not to freeze, waiting for the results of the route game to be summed up, the variety dance ensemble of KSMU “Dance-party” organized a dance flash mob to the incendiary composition “I, you, he, she is a friendly country together ….”

According to the results of the sum of points, the team of the dental faculty “Zubachi” won. In second place are representatives of the MPC. The honorable third place belongs to the IMI team. The winners received cups, diplomas and sweet prizes!

It was great fun! We got a great experience!” – shared the captain of the team of foreign students Ramakrishna Ramamurthy, a citizen of India.

– Team spirit, passion, the atmosphere of a snowy winter evening, hot tea with sweets for a long time charged with positive not only students, but also all participants of the holiday, – said Vice-Rector for Educational Work, Social Development and Public Relations Alesya Anatolyevna Kuznetsova.