DAY OF INDIAN CULTURE AT KSMU 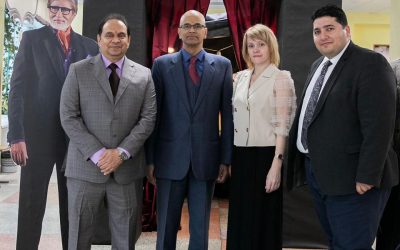 A bright performance was organized by the community of Indian students of Kursk State Medical University, where 638 citizens of this country are currently studying. The festival was timed to coincide with the visit of the Plenipotentiary Minister, Counsellor of the Embassy of the Republic of India Mr. Subrata Das.

Anthems of the Republic of India and the Russian Federation were played. The festival was attended by: Counsellor of the Embassy of the Republic of India Subrata Das, Vice-Rector for Educational Work, Social Development and Public Relations Associate Professor A.A. Kuznetsova, Director of the International Medical Institute Associate Professor M.T. Chahine, employees and students of KSMU from different countries.

Colorful national costumes, traditional Indian dances evoked plenty of emotions in the audience. The festival was dedicated to Indian cinema, many songs and dances were well known to viewers from famous Bollywood films.

According to the Vice-Rector for Educational Work, Social Development and Public Relations Associate Professor A.A. Kuznetsova, the holiday of Indian culture is a traditional event at our university. In recent years, it has been conducted online due to the COVID-19 pandemic. The stronger our emotions are from the resumption of such a format! – shares the impressions A.A. Kuznetsova. – Holding national holidays at Kursk State Medical University has become a good tradition, which unites students from different countries, being a platform for the interethnic dialogue development. At the same time, it is part of the adaptation programme for foreign citizens studying at the university, aimed at preserving their national traditions while staying in Russia.

The atmosphere of the festival was imbued with a special solemnity, emphasizing the importance of unity on this day. Students received powerful positive energy boost, stormily applauded and danced all together to national music at the end of a holiday.