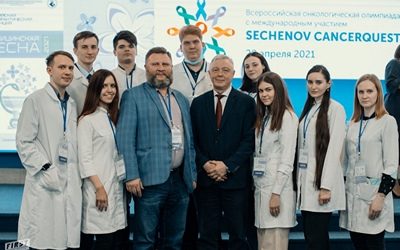 The final of the first All-Russian Cancer Olympiad with international participation “Sechenov Cancerquest” was held at Sechenov University on April 28 within the framework of the Medical Spring – 2021 conference.

26 teams from 21 universities and 12 cities of Russia and Tajikistan competed in the qualifying round, which took place on April 12. 9 best teams from 7 medical universities of Russia, including the team of Kursk State Medical University “Kurskmed.com”, which included 6th year students of the medical faculty, reached the final. For several months, the KSMU team was preparing for the part-time and full-time stages of the oncology Olympiad under the leadership of the head of the Oncology Department V.V. Khvostovoy.

The Olympiad was organized by the Institute of Cluster Oncology named after L.L. Levshin of the Sechenov University, the jury included such famous oncologists as the chairman – Academician of the Russian Academy of Sciences, Doctor of Medical Sciences, Director of the Institute of Cluster Oncology I.V. Reshetov, an international expert from London, a leading specialist in thoracic surgery in the UK Professor Vladimir Anikin (Royal Brompton Hospital).

The tasks were very difficult in the final part, the teams performed surgery tasks based on a unique operation carried out within the walls of the Sechenov University Hospital, solved situational problem tasks in oncology and fought for the right to be the best in a quiz. In a bitter struggle, our team took third place, losing quite a bit to the teams of Rostov State Medical University and Sechenov University. One of the contests evaluated by the jury was the preparation of a three-minute video on the topic: “Why do we choose oncology?” The video clip of Kursk State Medical University was highly appreciated by the jury and rave reviews from guests and members of other teams. Also, V.V. Khvostovoy took part as an independent external expert in the competition of 17 student scientific circles of Sechenov University.

The leadership of the Sechenov University expressed gratitude to the rector Viktor Anatolyevich Lazarenko for the preparation and delegation of the team, as well as for the active and effective participation of Kursk State Medical University in the previously held “All-Russian Oncological Dictation” campaign. 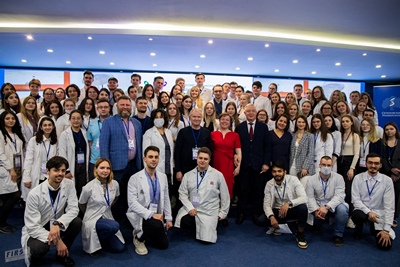